Welcome to my Blog!

From here, you can explore my shops, learn about new trends, see recent creations from my studio, hear about my day, or maybe just enjoy a nice picture I am sharing. Come back often!

I recently learned about a wonderful boutique designer named Leona Caldwell.  She made her own ceramic pieces, used in jewelry and belts, based on ancient Hohokam Native American designs.
The reason I discovered her is below.  Amongst my grandmother's many collectibles, some of the "discards" going to charity were set aside for me to look at (possibly for jewelry making).
This signed designer belt was included...I am so glad I got it instead of a thrift store!  Yay! 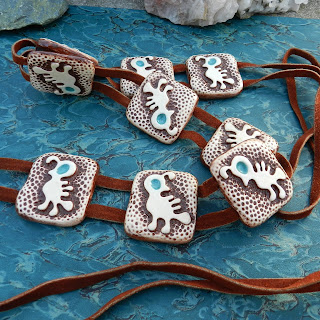 There are 3 different poses of the baby quail in the belt, all are shown here. 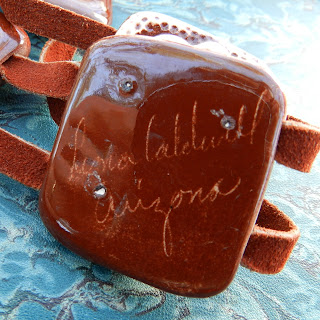 Her signature appears on only one piece.

The entire piece...the leather is stuck now but still pliable. 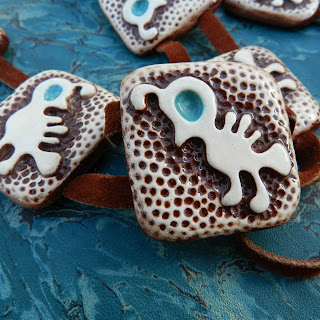 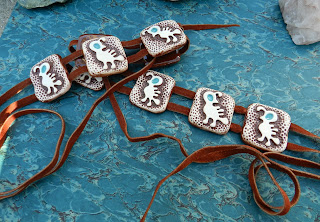 Not extremely well known, Leona Caldwell is still quite collectible.  In addition to her ceramic pieces, she also designed (and handmade) dresses and jackets that incorporated the Hohokam designs.  Some designs featured agave, opuntia, owls, phoenix, eagle's eye, quail, and cone flowers.
A great place to see her clothing is here:
http://theseekspeak.blogspot.com/2011/09/vintage-designer-leona-caldwell.html
From her obituary I obtained this information:
"Leona H. Caldwell drifted into death April 19, 2003. She was born Leona Holly May 31, 1912, on a farm near Peoria. First of five children born to Bob and Bessie Holly, she was last to survive.

Married in 1933 to Ralph W. Caldwell, Jr. she had two children, Ralph and Pat. While Ralph Jr. was in the Pacific (WWII) she returned to Arizona State Teacher's College in Tempe to study art.

When her husband died in 1954, she expanded her ceramic studio in Phoenix and soon opened Leona Caldwell Originals in the Kiva Craft Center on Fifth Avenue in Scottsdale, neighbor to fellow artisans Lloyd Kiva, Charles Loloma, Paolo Soleri and many others. She created ceramic jewelry and garments silkscreened with original designs inspired by Hohokam artifacts, animals and plants of the Southwestern desert. She retired in 1978 to enjoy her home, garden, and family.

In addition to her two children Ralph W. Caldwell and Patricia L. Konomos, she has five grandchildren: Kevin Higgins, James Konomos (deceased), Karen Markland, Anastasia Konomos, and Ralph T. Caldwell. She is great-grandmother to eight and beloved aunt and friend to many.

She will be remembered by all for her creativity and moral example, and missed for her generosity and love. "
The Arizona Republic, Phoenix, Arizona
Tuesday, April 22, 2003
Thanks for reading!
Susan
Posted by McKenzie Creek Jewelry at 5:38 AM

My newest shop is at www.McKenzieCreekJewelry.com and I would love for you to visit. Prices are a bit lower than Etsy due to lower fees for now. Also have some items on sale! Just click on the picture in the box below to get there. Thanks! 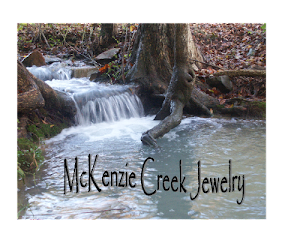 McKenzie Creek Jewelry
Wife, mother, and grandmother who has always enjoyed the small pleasures of life like the smile of a child, the fragrant blooms of summer, or a great home-cooked meal.

Other Posts by Me, in case you missed one!